In accordance with the Federal Law No. 17 of 1972 regarding Nationality and Passports, all UAE nationals shall hold the UAE passport, which reflects the spirit of unity among the Seven Emirates. The UAE passport experienced many changes since its inception. 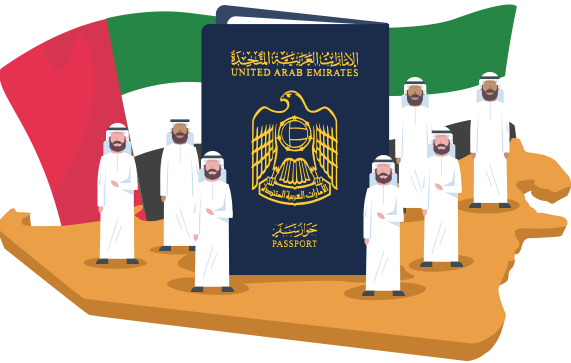 Before the formation of the Union, each emirate used to issue its own passport, which was called (Barwa) at the commencement of 1950s. It was a one paper document valid for one year only. In the second phase, later at the end of 1950s, the passport of the Trucial States (Red) was issued with a validity period of two years from the date of its issuance, and can be renewed for four more times, provided that each period does not exceed two years. It could be used to travel to all States mentioned in the fourth page. 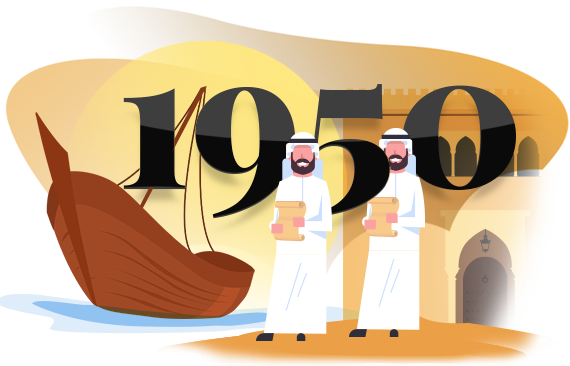 After the formation of the Union, the first passport was issued in black color. It was issued and renewed by the Directorate of Passports of the Federal Ministry of the Interior and by the diplomatic missions and UAE consulates abroad, where applications were submitted for this purpose. 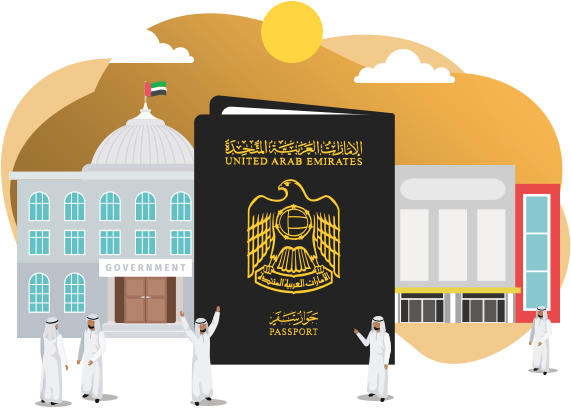 In 2011, the Ministry of the Interior began to issue machine-readable passports or electronic passports to UAE nationals in accordance with the technical and security requirements of the International Civil Aviation Organization (ICAO).

The electronic passport is characterized by high technical and security features. The last page contains a remote-readable electronic chip that stores the personal and biometric data of the passport holder. This chip is encrypted to prevent counterfeiting. The image, signature, and fingerprints are printed and cannot be modified.

The first page of the passport contains a watermark of the outer frame of Sheikh Zayed Grand Mosque, while its last page is adorned with the actual painting of the mosque with domes and columns. 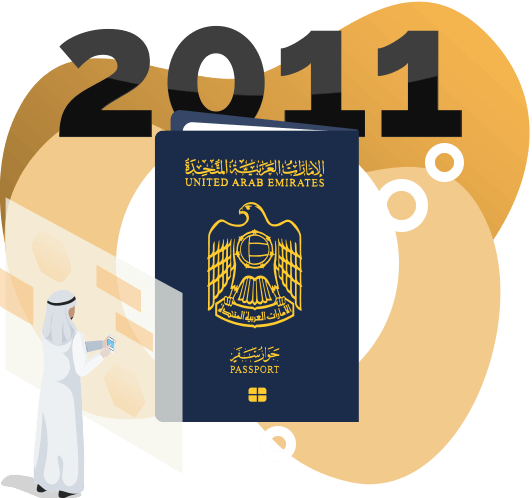 The Federal Authority for Identity, Citizenship, Customs and Ports Security declared the issuance of the new generation of the Emirati Passport, as part of the new generation of Emirati passports and national ID card project, which was launched in June 2021. The project came within the framework of achieving the strategic objectives of the authority to support the National goals in enhancing the international competitiveness of the UAE.

The New Generation Of Emirati Passport

The new Emirati Passport has exceptional technical features that keep pace with the aspirations of the UAE government and promote the movement of development and modernization, in addition to embodying the cultural stature realized by the United Arab Emirates within the various governmental services provided and in fulfillment of the latest security and technological requirements in proving the personal identity.

Where the new generation of Emirati Passport is characterized by unprecedented technical characteristics and very complicated security specifications to reduce the attempts of forgery or falsifications, as it is featured with printing the identification page of its holder using polycarbonate instead of paper, which increases the efficiency of specialized printing supported by photos and images and security marks that which can’t be seen with the eye, especially as it is featured with thickness, which prevents the possibility of being damaged, in addition to the easiness for processing it using readers at the ports, as well as the uniqueness of this version with high quality and velocity when printing through the use of laser technology and with three-dimensional tangible elements that support reliability and flexibility to verify the security and safety requirements when traveling or passing through the international travel points.

What is the reason behind changing the current passport?

The government of the United Arab Emirates seeks the continuous development and improvement in all its services and operations related to the issue of its official documents. So, to foster the reliability of the passport, the State launched its new passport with international specifications that meet the requirements of the next stage.

The new Emirati passport is characterized by the presence of some advanced technical and security specifications as follows:

The passport was recently renewed, so is the citizen required to reissue his/her passport in the new form?

Will my transactions within the State be affected if a passport is not issued in the new form, knowing that my current passport is still valid for more than 6 months?

There is no effect, as transactions within the State are subject to the adoption of the Emirati ID Card as a means of proving the personal identity with the various official authorities.

How to apply for the issue of a new passport? ls there any change in service requirements or fees?

There is no change in the requirements for obtaining the service or the stated fees, as the applications of issue or renewal shall be submitted through the electronic and smart channels, with the same stated fees without change.

Has the number of years of validity of the new passport amended?

What are the criteria for including the photo when issuing or renewing the new passport?

The photo required to issue or renew the new passport shall subject to the same criteria previously approved by the Authority, and they are related to the specifications of the International Civil Aviation Organization (ICAO).

Will the expiry date of the passport be unified with that of the ID Card?

The design of the shape of the new passport shall remain externally in the same shape as the previous version and with the same color, while it is completely different from inside, as it is featured by its engravings that embody the limestone of the civilized country as it is unique to the identification page of its holder, which is made of polycarbonate instead of paper containing a package of the following characteristics:

When will the issue of new passports be implemented?

The printing of the new generation of the Emirati Passport will start effective from next September 2022.

I recently applied for issue/renew the passport. Will the passport be delivered to me in the new or the previous form? And how do I know that?

Yes, the new passport will be issued to you if your application is after the date of the Authority’s declaration of launching the new Emirati Passport.

My passport is still valid for more than 6 months, so can I travel with it outside the State? Does it require me to apply for the issue of the passport in the new form?

You can travel with your current passport, as there is no change in the procedures for movement by the passport, where its holder shall verify the validity period of the document and for a sufficient period of not less than 6 months in accordance with the requirements of international travel, knowing the fact that it is possible to apply for a new version upon entry within the crediting period of renewal which is 6 months before the expiry date recorded in the document.

The issue of the new generation of the Emirati passport Press release, Click here